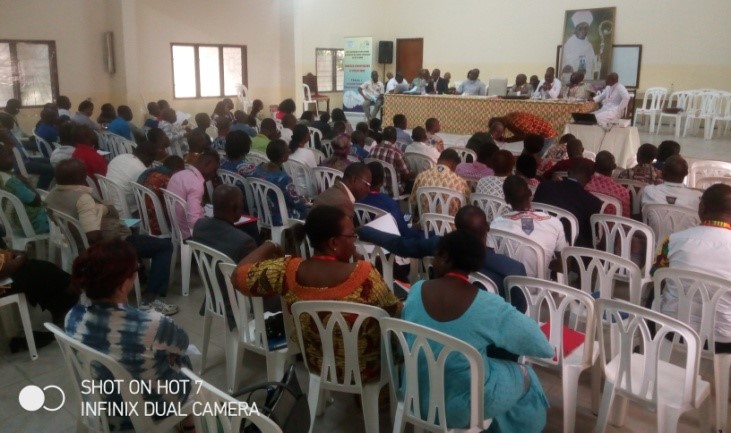 For more than fifteen (15) years, the Association des Cadres Catholiques of Côte d’Ivoire (ACC-CI) has seen its activities suspended, by decision of the hierarchy of the Church, following conflicts of interest and skills of former leaders.

Aware of the important role of lay faithful in the Church (see Vatican Council II), the Fathers Bishops of Côte d’Ivoire, during their Plenary Assembly on January 22, 2017, invited the Catholic Cadres “to take or better to take back their place, not only in the proclamation of the gospel, where the call of God has placed them, but also in the decisions that impact the future of the nation ”.

Following this call, two Chaplains were appointed to, not only put in place a dynamic team to constitute an ad hoc committee which will develop new texts, but also and above all hold a congress to appoint the future managers of the new mount of ACC-CI.

To therefore succeed in this mission, these two appointed Chaplains, who were present at the special regional session organized by MIIC Pax Romana in Côte d’Ivoire from October 15 to 18, 2018, wished MIIC-CI to provide them with members competent to help them in this new mission. This is how four (4) of our collaborators supported the work of this ad hoc committee.

Thus, under the leadership of the members of MIIC Pax Romana Côte d´Ivoire, new texts were developed, presented and validated during a pre-congress.

Following this pre-congress for the validation of texts, a congress was convened from February 15 to 16, 2020, in order to elect the new managers of the new ACC-CI. The delegates came from all the Dioceses of Côte d’Ivoire, and the work took place in a perfect fraternal atmosphere. The first day was dedicated to the orientation speech of our Fathers the Bishops and to committee work. As for the second day, it was a question of the presentation of the results of the work in plenary, and the elections of the new leaders.

Thus, since February 16, 2020, the Association des Cadres Catholiques de Côte d’Ivoire has renewed its bodies after fifteen (15) years of inactivity, and a memorandum of understanding is being drafted with ICMICA-CI, determining the clauses of our future collaboration. This document will be signed after the presentation mass of the new team which will take place in March 2020.