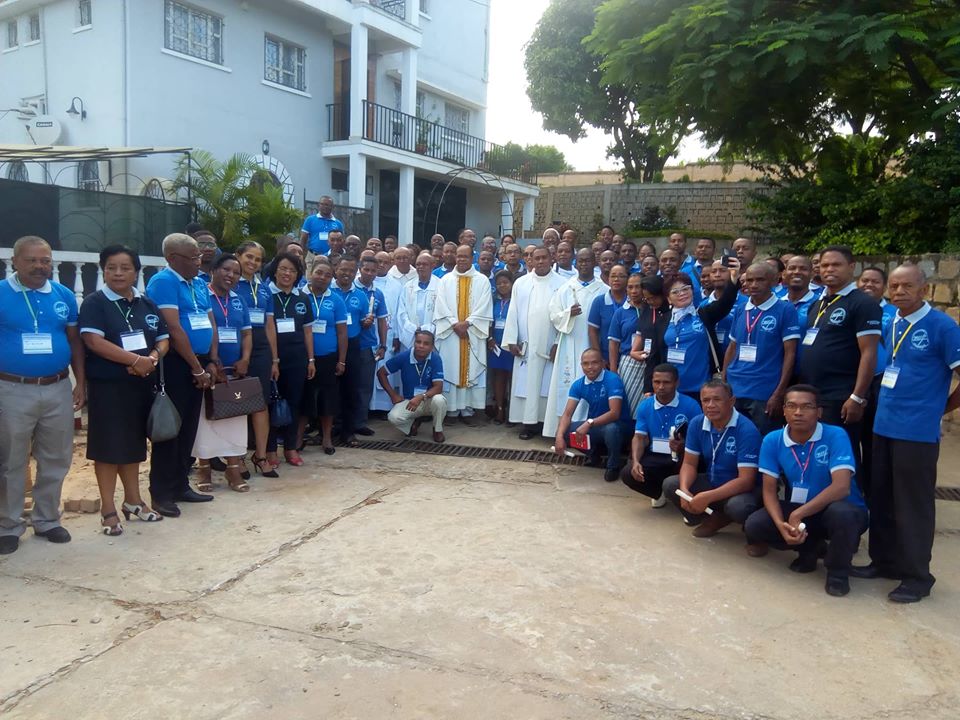 The weekend of January 31 to February 2, 2020, the leaders of MCCP Madagascar, composed of the presidents, vice-presidents and chaplains of each region as well as the members of the national office, met at the Sainte Thérèse d’Avila spiritual center in Itaosy Antananarivo, for the evaluation of the pastoral year 2019, but especially for the preparation of the national congress to be held in Fianarantsoa on August 20 to 23, a date that has already had approved by the Archbishop of Fianarantsoa Mgr Fulgence RABEMAHAFALY.

The meeting was a success, because despite the challenges regarding road facilities for certain regions, most of the teams were represented. A total of 82 participants, including 12 chaplains, occupied the centre’s rooms and dormitories. Bravo and special thanks to the Diégo members who only arrived on Sunday morning because of the flight problem, and had to leave the assembly before lunch for the return flight. The result is very promising. The 06 commissions that have been created: Agenda, Theme, Logistics, Finance, Spiritual and liturgy, Statutory will give birth to a roadmap to make this congress pleasant and fruitful in all respects. The chosen theme will mainly concern the fight against corruption and the safeguarding of the environment, according to the Pope’s messages, during his visit to Madagascar four months ago. The few remaining months will be devoted to the short-term preparation of this congress, especially for the host team, Fianarantsoa, ​​and the national office. But each and everyone agreed to join hands to carry out this congress which is estimated to be able to bring together 600 participants, including guests from Pax Romana Africa and World, the International Team and MCC France. However, some visits to strengthen the existing teams were necessary from the national office: Fianarantsoa, ​​Miarinarivo, Ambatondrazaka, Ambositra, Antsirabe, Fort-Dauphin (for creation), Antalaha Mananara Avaratra, Manakara, Nosy Be. For visits, teams bordering or in the same diocese will support the national office. This meeting ended on February 2nd , the day of the solemn celebration of the Lord’s presentation in the temple. A moment to remind these leaders of the MCCP the motto of the movement: “I established you as a light for the nations so that you bring salvation to the end of the world” (Is. 49:6).

By RAHASA, member of the national executive Team